Any reasonably sane person will admit this ‘birther’ movement is comprised entirely of nut jobs. I understand in any number of circumstances, calling activists ‘nut jobs’ does quite a bit to damage the activist voice, from either side of the isle, in a country dominated by a sensationalist new media which picks and chooses its message.

Still, it seems everyone but the very, very far right group of insane people can agree that this claim that Obama wasn’t born in Hawaii is distracting responsible people, as well as the news media, from more important issues… like health care reform!

Admittedly, I haven’t paid real close attention to the ‘birther’ news cycle simply because its a stupid argument to make. Its been proven. Its been proven more than once. And don’t even get me started on self-proclaimed ‘Mr. Independent.’ Lou Dobbs is a right-wing groupie posing as a responsible journalist. You think I’m wrong? Hell, even FOX’s Bill O’Reilly lends no credence to the ‘birther’s’ claims.

Here’s a pretty entertaining mash-up, of sorts, from Media Matters:

Here’s a hilarious comic by Matt Wuerker sent to me as my daily cartoon from the Center for American Progress. Its just priceless: 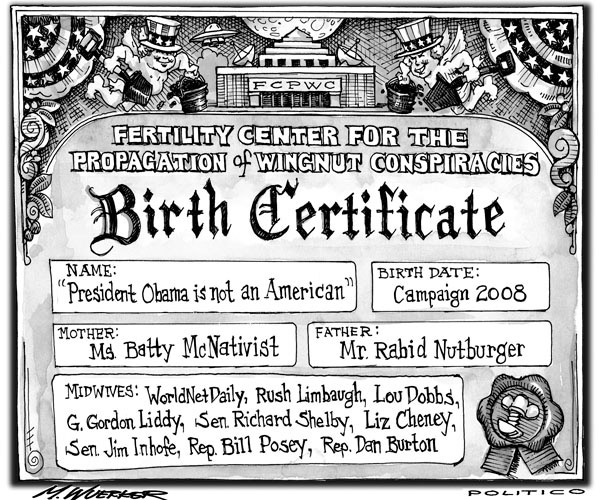 There’s a small part of me that just feels sorry for these ‘birther’ people who can’t seem to find a better outlet for the frustration. Or for their insanity.

On Saturday, July 25, the Oahu County Committee (OCC) of the Oahu Democratic Party voted to set aside the recommendation of its Rules Committee to dismiss a complaint against State Senator Mike Gabbard and instead passed a resolution to reprimand the Senator.

Senator Gabbard is not a good Democrat, despite what some might say. In fact, before August 2007, he was a Republican; one reviled by most, if not all, Democrats. He was brought into the Party as part of a deal struck by State Senate President Colleen Hanabusa. She agreed to support his membership in the Party, if he’d agree to join her faction in the Senate. At the time, the idea of allowing Gabbard into the Party made just about everyone I know sick and some long-time Party members even quit the Party in disgust. Despite the foul taste the whole thing left in our mouths, Democrats couldn’t keep him out.